Youth in the Middle East and North Africa (MENA) are aware that the region is very different today compared to when their parents were young. Navigating unemployment, safety and security issues, and online social interaction can be overwhelming for teenagers. However, they do not feel the older generation are very willing to listen or take the time to understand the challenges they face.

SAT-7 ARABIC’s innovative women’s program Start from Here is laying the groundwork for youth and older generations to start talking.

“We want to get the two generations to understand one another, instead of facing off over different issues,” says Presenter Basma Gammoh. A mother herself, Gammoh brings the perspective of MENA parents and guardians to the program’s discussions while demonstrating a willingness to listen. She admits that youth face an uphill struggle. 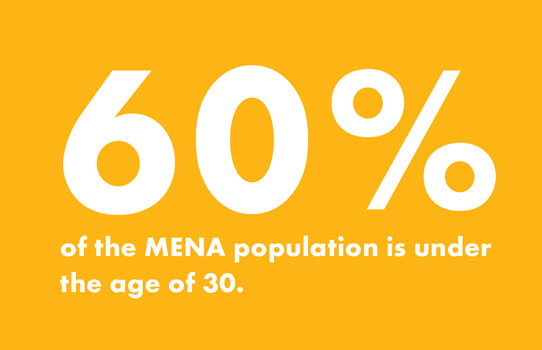 “All youth in Arab countries face walls of ageing minds that oppose them. Large, tribal families in Jordan restrict their younger members, while in Tunisia, it is mostly managers who restrict young people in the workplace. We need to address these issues so that we can believe in, encourage, and empower the younger generation.”

Presenter Dina Halaseh is a young Egyptian woman who represents the views and challenges of the up-and-coming generations on Start from Here. Halaseh says she feels honoured to be part of a program that tackles controversial issues.

“It’s refreshing to see that many topics that were thought to be off-limits are now discussed publicly. For example, discussing sexual assault and harassment is considered a taboo in our culture,” she expresses.

“It’s a good reminder for both generations to realise that while we face some of the same challenges, we are different from each other and face our own sets of difficulties,” Halaseh adds.

“The more educated and well-informed we are, the better. This means better decision-making, better involvement in the community, better standards of living, better parenting and attitudes towards young children, and hence a better generation to come.”