THE HEARTS AND MINDS BEHIND SAT-7 ACADEMY

Juliana Sfeir and George Makeen are two of SAT-7’s most innovative and dedicated leaders. They have witnessed first-hand the urgency of educating the next generation. Here they share their motivations and explain the exciting aims of SAT-7 ACADEMY, that will launch on 1 September.

Sfeir has recently been appointed, from social impact Programming Manager to Manager for the new channel, which aims to help fill the gap in quality, holistic education in the Middle East and North Africa (MENA). Having been born and raised in Lebanon, she is acutely aware of the pitfalls of the region’s educational approach, which often relies on poorly-equipped teachers and rote learning.

“Too often our education system fails us,” Sfeir comments sadly.

“Students become leaders but lack the values of good leadership. They become active citizens, but perhaps lack the moral understanding to make a positive contribution. Those who become part of the elite know nothing about how to include others.” She explains that curriculums are also inherently divisive, not reflecting ethnically and religiously diverse societies

The displacement of millions of refugee children has made the need for quality education even more urgent. Schools, in countries hosting refugees, are overwhelmed with the increase in students and are finding it difficult to cope. Many displaced children are going without schooling altogether.

THE RIGHT TO AN EDUCATION

Sfeir, who received a Human Rights Journalism Award in 2013, is strongly driven by her Christian values and belief in a universal right to education. “I would like to see SAT-7 ACADEMY educate minds and hearts, bringing a holistic approach to learning for children, their parents, and teachers,” she says passionately.

“I would like to reach all people, regardless of their race, gender, religion, or socio-economic background. SAT-7 has proven it can do this.”

Along with veteran SAT-7 colleague George Makeen, Sfeir has visited refugee camps in Lebanon and other parts of the MENA to assess the needs of refugees and how SAT-7 can meet them through its programs. There, they witnessed first-hand the struggles of refugee children, who are often dealing with the fallout of trauma including depression, anxiety, nightmares, behavioural problems, and domestic violence.

“I see God in the faces of these children,” says Egyptian-born Makeen, Programming Director for SAT-7’s ARABIC channels. “It pushes me to pray, asking God for justice and to be a Father to them. I pray He will protect these innocent ones from all the horror their eyes have witnessed. May we be part of God’s plan to protect them.” 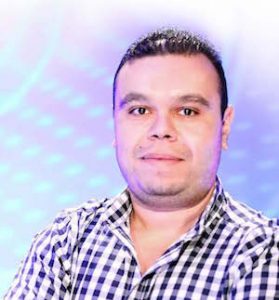 SAT-7 believes education can play a key role in providing this suffering generation with a better future. Makeen adds, “Everyone, especially underprivileged and displaced people, can shape their own destinies when given the chance. Everyone deserves the freedom to develop critical thinking, and to express their hopes and dreams outside of rote learning. Makeen recalls a recent SAT-7 ACADEMY production: Storytelling Club, in which refugee children were invited to participate in a story-sharing workshop together. “These shy children were all too aware that they are less fortunate and often not accepted by others. But once they were given the tools to express themselves, and to see themselves not as victims but as creative, powerful people, they excelled!”

As the region’s most popular and trusted source of information, satellite television is a perfect medium for delivering education to all communities, not only refugees. As Sfeir says, “There is an opportunity and a need. The time is ripe for change, and SAT-7 is in an ideal position to see immediate results on the ground.

A SENSE OF URGENCY FOR THE WHOLE OF HUMANITY

Sfeir believes that not only do we have a moral imperative to help educate refugee children in the MENA, the consequences of allowing their generation to become “lost” could have a global impact.

“It would be utterly naive to bury our heads in the sand, thinking ‘This does not concern me’ or ‘It will never reach me’. I believe we will start to see a reaction surfacing everywhere as a result of their trauma and suffering,” she says.

“These children need attention; they need a compassionate friend; someone to talk to. They also need knowledge, and they are so open and hungry for it,” Sfeir continues. “I pray that SAT-7 ACADEMY will be all this, not only for refugees, but for every person dealing with misfortune.”