Persian Christian TV-channel SAT-7 PARS is now live on Yahsat, which is one of the most viewed satellite platforms in Iran. Yahsat has attracted an estimated 10 million viewing households in the country. 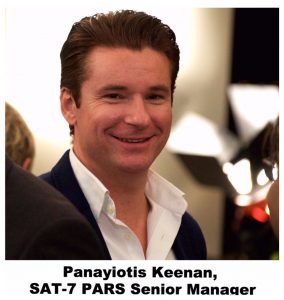 “This has been our dream for several years as Yahsat is an increasingly popular satellite with Iranians and it will enable us to interact with a whole new audience in Iran and other parts of Central Asia,” says SAT-7 PARS Senior Manager Panayiotis Keenan.

Yahsat has attracted an estimated 10 million TV households in Iran out of the 20 million homes with access to satellite TV, and has rapidly become one of the most prevalent satellites for Farsi speakers.
Yahsat provides a focused, high-power beam specifically on Iran and Afghanistan – one that requires a much smaller, cheaper and less-conspicuous dish than would typically be required for other satellites. Furthermore, because of the quality and variety of Farsi-speaking channels that Yahsat offers, they have established themselves as the increasingly popular choice for families to point their dish at.

THE ONLY CHRISTIAN CHANNEL 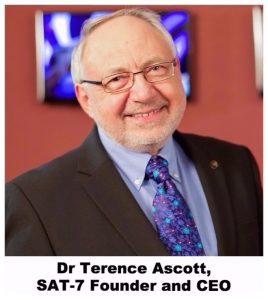 “By broadcasting on Yahsat we have a whole new viewership; industry data indicates that it probably doubles the number of potential viewers for SAT-7 PARS in Iran,” explains SAT-7 Founder and CEO, Dr Terence Ascott.
“In addition, there are no other Christian channels on this satellite and so this is actually quite a unique and special opportunity for us.”

Moving to Yahsat will also allow the channel to provide a better-quality picture, and even upgrade to High Definition (HD) in the future. The addition of Yahsat also doubles the number of hours of Farsi we can broadcast each day, opening the window for broadcasting many new types of programs.
“At the moment, we are mirroring the same schedule that we have on our channel on the Hotbird satellite but our eventual plan is to have a different schedule for Yahsat,” shares Keenan. The different schedules will allow more choice for the viewers that have the capability to watch SAT-7 PARS on both the Yahsat and Hotbird satellites.

SAT-7 PARS has been broadcasting for ten years on the Hotbird satellite to a wide audience in Iran, Afghanistan, Tajikistan, the rest of the Middle East and also Europe – as well as on-line to Farsi-speakers living around the world.
SAT-7’s positive, politically and culturally sensitive Christian programming has won the trust of many in the region, and this is believed to be the main reason that it could now broadcast on Yahsat. SAT-7 PARS will also contribute to the expanding range of choices for the viewers of Yahsat.

Launched in 1996, with its international headquarters in Cyprus, SAT-7 broadcasts Christian satellite television to an audience of at least 21 million people in the Middle East and North Africa. SAT-7 broadcasts in Arabic, Farsi, and Turkish languages on four channels.