A DEEP THIRST FOR GOD’S HOPE IN SYRIA

Since the Arab Spring of 2011, Syria continues to be torn by war until today. Debilitated infrastructure, lack of security, inflation, armed conflicts and continuous displacement of people, mark daily life in Syria. Mina Awny, Presenter of Family of Jesus on SAT-7 KIDS, traveled to Syria to give hope to children still living there. He shares a personal account of his visit.

My wife and two members of our ministry came with me to Syria. During our four-day journey we visited Daraa and Suwayda.

Despite hearing and reading a lot about the situation in the news, I wasn’t prepared for what I saw. We commuted by car between the Syrian provinces, and along the way all we could see were deserted roads and destroyed buildings. There were hardly any soldiers or checkpoints on the road.

We got lost on our way to Daraa. With no one in sight to ask for directions, our driver became frustrated. We calmed him down and searched for miles for someone to help us find the way.

As we entered Daraa, it felt gloomy. The city looked destroyed and smelled of death. There were remnants of burnt places and bodies buried in shallow grounds. Many shops and houses were abandoned, covered in holes from missile strikes.

Daraa – known for being a hiding place for rebels – was one of the first places where violence broke out between the Syrian army and the rebels in 2011. It was the first city captured by Daesh militants.

With combat taking place on their doorstep, many residents witnessed deadly battles first-hand as their homes became casualties of the armed conflicts.

Despite the heartbreaking atmosphere of the city, there were smiles of joy on the faces of the Syrian Christians who received us in their homes and churches.

Christians in Daraa feel isolated and unreached. They crave for visits like ours to their churches. They pleaded with us to stay longer because these visits give them hope to continue living. They yearn for even a short time of praise and worship together.

As soon as they met us, they exploded in tears telling us the horrific incidents they lived through when Daesh came to their city. They cried while telling us about the passing missiles shattering the glass windows of their homes and endangering their lives and their children’s lives.

But in the middle of all their distress they never lost their faith. They trust that God protects them.

We had heard encouraging stories of thousands of believers returning to Christ during the Syrian war, but not everywhere. The church is facing challenges in many areas in Syria.

The city of Daraa is known for being home to strictly religious non-Christians. One church we visited is now without a pastor, as the previous pastor fled during the conflicts. Congregation members are taking care of the church and keeping it open for the Christians living there.

In another city in Syria, the church is facing a completely different challenge. Due to the influx of non-Christians accepting the Christian faith, tensions erupted between the new believers and the first generation Christians, leading many church pastors to despair. Some pastors abandoned their churches completely, unable to cope with the changes.

The church in Syria is facing similar challenges to the first century church. The church needs our prayers and help to survive in this tumultuous region.

Our previous trip to Syria

This was the second time we visited Syria. We had visited some places in Syria in 2018, however, the places we visited before weren’t affected as much by the strain of war.

Churches that we ministered to in 2018, in places like Bloudan, Tartous and Suwayda, were overflowing with children thirsty for the word of God and full of hope and faith.

Our ministry is compassionate about children. We serve children through SAT-7 KIDS’ program Family of Jesus. We visit children all over Egypt and we try to reach out to children in other countries in the Middle East.

In all those places we felt a deep thirst in the children and families for a message of hope from Jesus Christ. 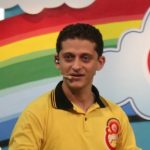 Mina Awny is an Egyptian Christian anesthetist. He is a member of a praise team for children. Mina and his team have created many programs of praise and worship on SAT-7 KIDS such as With Jesus, and Family of Jesus.