TONIGHT: LEBANON – A CRY FOR THE NATION

As thousands of Lebanese from across the spectrum of religious groups and ethnic communities continue protests across Lebanon, SAT-7 is tackling the issue through a series of live episodes airing tonight on SAT-7 ARABIC. The channel has invited various leaders from the Lebanese Christian community to share their opinions and debate on a way forward.

“We are expecting a lot of viewers for tonight’s program, Lebanon – A Cry for the Nation. Tonight is the first of three episodes which will be airing over the next few days. The aim is to offer space to debate how this situation is affecting the Christians in Lebanon and to hear the perspective of the Church in Lebanon,” shared Maroun Bou Rached, Lebanon Office Executive Director of the Christian Satellite Network, SAT-7.

The episode tonight will include reports from the streets of Lebanon, as well as discussions with Lebanese Pastor and MP Edgar Traboulsi and Maggie Aoun, a broadcast journalist known for her focus on social impact issues.

The channel is continuing its operations from Lebanon but is operating on a skeleton staff in the interests of staff safety, as no one is sure what will happen or how the situation could change.

“We ask that people across the world keep the people of Lebanon in their prayers; that they would pray specifically for a way forward –a vision for the country – a peaceful roadmap for our future that will show the way for tomorrow, and the future. Please pray that He will give us a vision, as people are worried about how the situation will unfold,” continued Bou Rached. 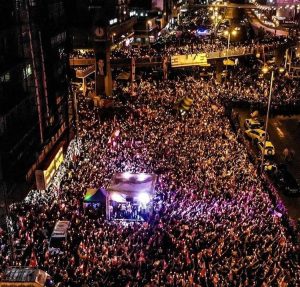 The SAT-7 ARABIC and SAT-7 KIDS channels broadcast programs across the Middle East and North Africa in Arabic. Their ACADEMY brand of programming, featured on both channels, specialises in education and development aiming to inspire and educate millions of children across the region, as well as equip and encourage parents and teachers.

“The demonstrations have unified Lebanon’s various sects, with Shia, Sunni, Christians and Druze protesting side-by-side as they are faced with an economic collapse. Children in Lebanon are dreaming of a brighter future, as are millions of others who are living in refugee camps, who rely on our educational programs to change their lives. It is this generation that is inspiring all of us to join as one voice so we can offer them a brighter future,” he furthered.

Lebanon, A Cry for the Nation tonight at 10pm Lebanon time. SAT-7 ARABIC.