In just three minutes, a graphically illustrated web series takes viewers deep into the Bible, explaining a key principle of Christian living. H2O is a series of 100 short teaching episodes airing in Arabic both on satellite TV and online, covering the essentials of the Christian faith.

One early episode explains  the biblical basis for monogamous marriage. This is a profound concept to people living in Middle Eastern and North African communities where polygamy is commonly accepted. The narrator explains that the idea of one man marrying one woman begins in the Old Testament. The verses he uses verses Proverbs 31:10-12 and Proverbs 18:22 to demonstrate. He goes on to say that in the New Testament, the Church continued to rely on the words of Jesus, “He who created them from the beginning ‘made them male and female’” (Matthew 19:4 NIV). The exclusivity of a married relationship is further emphasized in Mark 10:8-9, “And the two will become one flesh. So they are no longer two, but one. Therefore what God has joined together, let man not separate.”

Moreover, H2O explains that a married couple is not meant to remarry unless one of them passes away. What characterizes a Christian marriage is the lifelong covenant between the couple. The narrator defines a covenant as the promise between one partner and another. This is noteworthy because the majority religion of the Middle East permits divorce with few restrictions. Thus leaving women especially vulnerable as they are not legally granted custody of their own children and in some countries cannot typically work, own property or a car, or otherwise independently care for themselves. The narrator mentions the consent required of both partners in the marriage, an adult consideration which sheds much needed light on the many personal and social problems engendered by all-too-common child marriage in the region. The two partners are meant to help each other.

Despite the short length of the episode, four Scriptures are displayed on the screen and read aloud by the narrator. Given the scarcity of Bibles and high illiteracy rates in closed countries, SAT-7 purposes to broadcast Scripture as often and as clearly as possible.

H2O is a part of the channel’s TEACH (Theological Education for Arab Christians at Home) programs, and addresses six different themes: 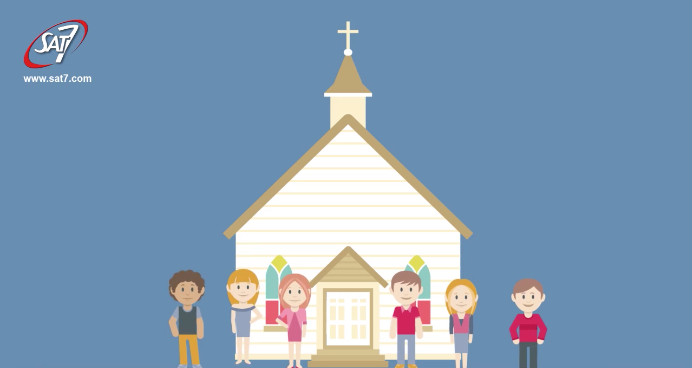 Producer John Adly believes that, just as water is essential for our physical life, so is theological teaching necessary for spiritual growth. His objective is to present Christian teaching in a simple and creative way, to be better understood by viewers of all backgrounds.

“During production, I bore in mind that the program would also be presented on social media, for younger viewers who mainly use tablets and phones, so it would need to be short and engaging,” explains Adly.

H2O is one of many “small” programs making a big difference in the lives of our SAT-7 audience. Stay with us as we continue to introduce short web series airing on SAT-7.

Every euro makes a difference. Your gift of €1 supports 1 viewer for 1 year! Click here to give now!