A unique praise group from Sudan recently featured on the SAT-7 ARABIC music program Keep on Singing. The Candlelight Choir, which is made up of believers from many different churches and backgrounds, travelled to Cairo for the live broadcast.

The singers perform well-known and original worship music in various styles and from many Christian traditions, including the Catholic, Coptic, and Evangelical churches. On the show, the group sang several new songs including “Hallelujah Jesus is alive”, which features lyrics both in Arabic and in the Juba Arabic Dialect from South Sudan. They also made several separate music videos for SAT-7, some of which were recorded at the famous Cave Church in Mokattam, Cairo.

The 30-strong choir is the only interdenominational praise group in Sudan, and taking part is a powerful experience for the singers. Choir member Mido said, “Even though we come from different denominations and cultures, we have a spirit of unity and acceptance in the team. We accept one another just as we are.” As well as performing together, the singers have taken part in events at one another’s churches.

The choir’s inclusive approach also enables it to touch the hearts of people from many backgrounds in Sudan, where music is an important part of cultural life. Mido explained:

“Our music is different – we combine all the different genres and rhythms, so we can reach everyone. People from different tribes and communities can enjoy our music, because they can each hear their own music style in our songs.” 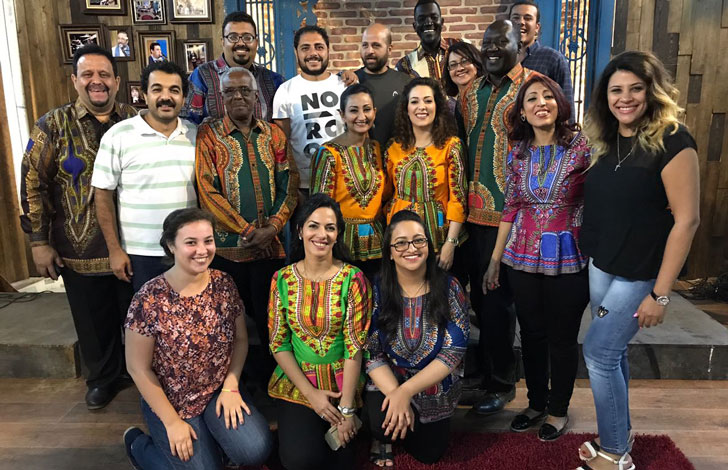 The choir has even helped promote international harmony. When representatives from Ethiopia and Egypt came to Sudan for negotiations about the contentious Renaissance Dam project, the Candlelight Choir were asked to perform to help maintain peace between the parties.

PRAISING AGAINST THE ODDS

The choir is one of many international music acts invited onto SAT-7 by Producer Andrew Gamal, who has “a vision from the Lord to produce songs from all the Arab countries and North Africa”. Gamal felt it was particularly important to include encouraging worship music from Sudan, where he has observed some Christians are losing hope because of limited religious freedom.

The Candlelight Choir itself began in response to a lack of seasonal celebration in their homeland. Organiser Samar Boules explained:

“Christmas in Sudan is very quiet; there’s hardly the joyful spirit you feel in other countries. There is no celebration outside church walls. When I’m in Sudan for Christmas, I feel sad at a time when I should be feeling happy.”

In 2007, the group planned a special “Carols by Candlelight” service, inviting congregations from many different churches. The choir was not then called “Candlelight”, but after audience members assumed this was the group’s name, they adopted it permanently. The Candlelight Choir’s popularity grew from there.

“THE RESPONSE WAS UNBELIEVABLE”

This is the second time the choir has appeared on SAT-7 ARABIC, having previously performed on We Will Sing in 2015. Boules described how the group’s profile was boosted by their previous appearance, saying, “We received an overwhelming number of comments from viewers around the world. We did not expect to hear from people in countries such as India, Indonesia, or South Korea. It was unbelievable.”

Several of the singers also testified to SAT-7’s popularity and positive influence within Sudan. “I want to thank SAT-7 for all its work to help the Church in the Middle East,” said Mido. “It is very rare to find media with such a powerful presence to empower the Church in this region.”