When the pandemic restricted attendance at the ordination of Archbishop Martin Kmetec, the new leader of the Roman Catholic Archdiocese of Izmir, SAT-7 TÜRK had the privilege of broadcasting the ceremony live on social media, enabling viewers from across the world to join the celebration virtually.

Almost 150,000 people watched the broadcast from Izmir Santa Maria Church on Facebook and YouTube. At the end of the celebration, Archbishop Martin Kmetec thanked SAT-7 for broadcasting, and he later followed these gracious remarks with a letter to the channel’s leadership.

“I would like to reiterate the expression of my gratitude to your television [channel] and the staff who were engaged in the transmission of the celebration,” he writes. “I had very positive responses from many parts of the world where people were able to follow the transmission. The quality of filming was in evidence.” 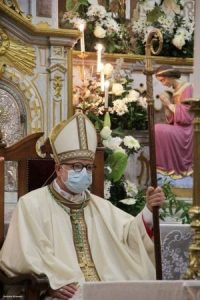 Monsignor Martin Kmetec continues to add a personal note. “In a special way, I am thankful for this great possibility by which you enabled my relatives to [join] the celebration, because they were not able to come to Izmir. May the Lord bless your ministry, and the Holy Spirit help you to find ways always to convey the Good News to the world,” the archbishop concludes.

Viewers also responded very positively. “Thank you for enabling us to witness this beautiful evening through SAT-7 TÜRK,” commented one viewer, with many others conveying their congratulations to the new archbishop.

Monsignor Martin Kmetec was appointed by Pope Francis on 8 December 2020; however, his appointment ceremony was postponed due to the pandemic and the continued impact of the earthquake in Izmir in October.

In the past year, churches in Turkey were restricted or prevented from carrying out services and celebrations, especially during Easter, due to the pandemic. Throughout this period, SAT-7 TÜRK supported churches of all denominations, providing a platform for special occasions, while also connecting Christians to their churches. Armenian Patriarch Archbishop Sahak Masalyan and the late Bishop Monseigneur Ruben Tierrablanca Gonzalez of the Roman Catholic Church were among those who connected with isolated Christians during the pandemic via SAT-7 TÜRK.