In Cairo this New Year’s Eve, so many believers gathered to begin 2019 in an atmosphere of praise and prayer that the 4,000-capacity Kasr el Dobara Evangelical Church (KDEC) had to expand into the street.

Together, the church’s two New Year’s Eve celebrations drew some 8,000 people, with 3,000 filling the main chapel and overflow rooms at each service.

Then, on both nights, a thousand more worshippers braved a bitterly cold evening to sing their praises in the street. They followed the service, which was entitled More of Jesus, on a large screen.

And, thanks to SAT-7 ARABIC’s live-stream of the second remarkable celebration, SAT-7 viewers across the Middle East and North Africa were able to join in, too. 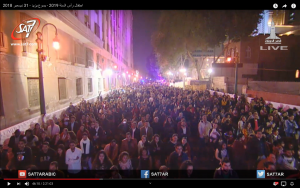 Eva Botros, a pastor at the church, shared, “We expected fewer people this year because of the cold, but it didn’t prevent people from coming. The worship was great – full of joy and life – and the message was very touching.”

Speaking at the service, senior pastor Dr Sameh Maurice took the theme of “making room” in a different direction. “If I’m filled with myself,” he said, “there won’t be space for Christ to increase in me.” Dr Maurice quoted John the Baptist (John 3:30), saying, “He must increase, but I must decrease”.

KDEC sees its ministry as not only to Cairo, but to Egypt as a whole. With this in mind, Pastor Eva stressed the power of SAT-7’s broadcasting the service.

“It makes the whole difference!” she enthused. “Eight thousand can come to our church, but the number of people watching weekly through SAT-7 is 200,000. In a country of 100 million, it isn’t enough to serve those who can come to the church. We need to reach across the whole country, to Upper and Lower Egypt.”

Pastor Eva often visits different areas of the country as part of the church’s social action program. On these trips, she has been thrilled to hear many people tell her of the “life-changing experiences they have by watching on SAT-7”.

The New Year’s Eve celebration wasn’t the only special gathering broadcast on SAT-7 ARABIC at the start of this year. With Eastern Christmas falling on 7 January, two more significant services were streamed live across the region.

On 4 January, KDEC played host to the Christmas Celebration of the Evangelical Church – the body that links most of the country’s Protestant churches. Among the guests were representatives of the Egyptian government and of the prominent Al Azhar university.

Those gathered heard Evangelical Church President Dr Andrea Zaki emphasise how the manger brought together people of diverse economic, social, and religious backgrounds – from shepherds to Magi. “Accepting the other is essential for a resilient community,” he said.

A NEW HOME FOR PRAISE

Then, on 6 January, the Orthodox Christmas Eve service was broadcast from the newly built Cathedral of the Nativity, which is the largest cathedral in the Middle East.

The building, located in Egypt’s new administrative capital outside Cairo, had been opened the very same day by Egyptian President Abdel Fattah Al-Sisi.