Iman, a Christian refugee from Iraq, had a crisis of faith when she had to face a Goliath-sized event. Militants invaded her village and Iman was forced to make a decision to save her family–to flee her home. When she arrived in Lebanon, a refugee without a single possession, the Church of Lebanon helped her restore her faith in Jesus.

SAT-7 ARABIC shared her testimony on the program “From East to West” to provide hope to millions like her. Born and raised in the Chaldean Christian Community in Iraq, wife and mother Iman was a believer until an unexpected trauma shook her faith.

“It was a quiet afternoon. My husband, our children, and I had lunch and then went for a nap. I started hearing children crying and people screaming. I looked out of the window and saw a horrifying scene. Extremist groups had invaded our village.”

As the terrifying sight unfolded before their eyes, Iman and her husband quickly realized that they had no other choice but to run, lest they be captured, tortured, or worse. The family headed towards Erbil, where conditions became increasingly difficult, so they decided to flee the country. Iman and her family then became refugees in Lebanon.

Traumatized by this experience, Iman felt she had lost her faith when she lost her home. Her Goliath-sized difficulties made overcoming her fear and anger seem impossible. With tears in her eyes, she recalls thinking: “My spiritual foundation is gone! There is no higher power, Jesus or Heavenly Father! What did we do to deserve this? The world is a monstrous place and God doesn’t exist.” 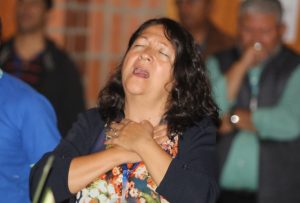 However, when Iman and her family arrived in Lebanon, her spiritual struggle was transformed into a stronger belief in Jesus. A local church began to show Iman the love of God by providing her family with supplies and spiritual counselling. Iman began to attend the church regularly and witnessed the power of faith within the Lebanese Christian Community. She says, “I realized that we are all bearing the cross in different ways, just like Jesus did. It’s a humble reminder of the sacrifice He made for our salvation.”

Iman is just one of millions of refugees who have faced similar Goliath-sized circumstances. To give them hope, SAT-7 ARABIC aired her story in “From East to West.” “From East to West” is a program that raises awareness of the struggles faced by Christians in the Middle East and North Africa. It is a program that, with your support, has impacted thousands of families by showing that, through God, we can be like David to overcome the Goliaths of this world.

Your gift of €1 supports 1 viewer for 1 year! Click here to give now!