A JORDANIAN “CONVINCED BY THE PERSON OF JESUS”

“It may seem strange, but this is what I totally believe in,” wrote Ramez*, a Jordanian living in Saudi Arabia, as he related the seven-year journey that had brought him, much to his amazement, to become a follower of Jesus. 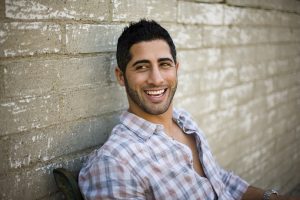 Ramez began writing to SAT-7’s audience relations team in the autumn of 2014. Almost seven years before, he told us, he had began searching to know more about Christianity. That search led him to SAT-7’s ARABIC and KIDS channels which he found compelling because they were “full of love and peace”.

Although from a non-Christian background, he said,

“I see that I have the right to be a Christian because I am convinced by the person of Jesus and by Christianity.”

“YOU ARE A SCHOOL OF LOVE AND PEACE”

“I’ve been watching for a long time now,” Ramez told us, and described how he often watches the children’s channel with his nephews and nieces.  “I always teach them to respect Christ and overcome hate with love,” he continued. Ramez called SAT-7 KIDS “a school of love and peace” and said how happy he and his young relatives are “because we are in safe hands with you”.

Ramez shared that he had received some opposition from his family and others close to him, but said, “Through your channel I persist in my faith and invite all those around me, young and old, calmly and reasonably [to consider it]. I simply am a believer in Jesus.”

A SAT-7 audience relations team member wrote back, giving Ramez further encouragement. In return, Ramez told us: “I accepted the Lord as my personal Saviour as a matter of personal love and forgiveness. I felt strength, comfort and safety. This was a wondrous thing that affected me, my character and my life completely.”

When we wrote again, Ramez said, “I don’t know how to thank you: your words leave a mark in my spirit and a blessing in my soul. I love Jesus because each time I face a hard situation or trial I come to him and feel his comfort and peace. ..It is like a switch button that stops all worries and sorrows and even anger. I don’t understand how millions of people don’t take that decision of accepting Jesus in their lives.”
*Name changed for security