BEIRUT, LEBANON – December  2019 – The nation of Lebanon continues to be in an uproar with political and economic challenges affecting the lives of the people. The people’s desire for basic social and economic opportunities has led to an unprecedented unity among various religious groups. SAT-7 ARABIC broadcasts the events unfolding at a prayer tent in Martyr’s Square, praying for God to intercede on the nation’s behalf.

Christian television network SAT-7 is staying on top of the events that began late October of this year. The protests in the street are in their ninth week. The SAT-7 ARABIC channel previously aired a series of live episodes analysing the impact of the protests and speaking with leaders in the Lebanese Christian community.

Following the live series, a live sermon from Resurrection Church in Beirut was broadcast, instructing Christians on their responsibilities in the midst of the unrest. Pastor Hikmat Kashouh said Christians’ first responsibility above all else is to pray for the will of God to be done in the country. He also noted, “Christians must be role models in seeking justice and defending the powerless. They should peacefully resist when those in authority behave unethically; they should reject unfair laws and challenge corruption.”

Most recently the SAT-7 ARABIC channel broadcast the prayer tent gatherings in the current affairs program Close Up, speaking with several members of the community on why they were there and what they hoped would be accomplished.

A “lighthouse of prayer”

The prayer tent was set up in Martyr’s Square in Beirut, Lebanon. One of the organisers shared with SAT-7 reporters how they wanted to honour God with “a special place as a lighthouse of prayer in this country.” God calls the church to be a light of the world in Matthew 5:14, “You are the light of the world—like a city on a hilltop that cannot be hidden” (NLT). The church doesn’t just minister to her own people, but rather sees the need of the world and goes out to meet it. This place where the tent is set up was purposely selected with being a place of high political activity and lots of interaction with the community. A mosque is located right across the street from the tent’s location, speaking to the heightened level of tolerance and coexistence happening in the nation of Lebanon during the past nine weeks of protests.

The organisers of the tent speak with protesters, telling them that “no human power can save Lebanon–that is why Jesus is our priority.” The presence of God is tangible to those passing by. They tell the tent organisers, “There’s peace in this place.”

A Sunday service was held in the tent, including worship and taking communion. Muslims were also in attendance and experienced the times of prayer and worship alongside Christian believers. Songs such as “Come, Now is the Time to Worship” were sung in both Arabic and English.

A young woman told reporters, “I came today to pray for Lebanon, for the rulers, for the protesters, for everyone.” She explained how the protesting has been going on for a month to no avail. She continued, “We trust the Lord has a good plan for Lebanon.”

A woman shared that they aren’t gathered merely to protest and make their voices heard, but that they are asking for the Lord’s presence to be with them. She emphasized how they want the Lord’s will in their country. Referring back to a biblical passage in 1 Samuel, the woman said, “There was a time when the people chose, but when King David came, the Lord chose. He was a man after God’s own heart, and now we want for God to choose the leaders, not the people.”

One man at the prayer tent explained, “We believe no one can make a change in Lebanon except the Lord through prayer because prayer changes society…we want to see God’s promises to Lebanon come to fruition. We hold on to God’s word and ask of Him, ‘This is the nation that we want you to take over.”

Another man offered a similar comment: “This is our hope, that more and more would understand we must pray.” In his prayer with the rest of the group he said, “The Lord of Lords is the final champion of all battles. The final word belongs to the Lord.”

Prayers for the future of Lebanon

The common hope of all gathering in the prayer tent is to see a real change in their beloved nation. They believe faith binds the people together and acknowledge that “only God can bring real change.” A man states, “We must humble ourselves in front of God and ask Him to heal our land.”

The SAT-7 ARABIC program Keep on Singing presented a prayer for Lebanon. SAT-7 viewer Samar called the channel to say, “We have no fear, for our future is in God’s hands…if everything seems dark now, we believe that He will shine His true light in the middle of the darkness.”

Please continue to keep the people of Lebanon in your prayers. Pray for a peaceful resolution to the conflict and for a sound governing body to be established that will restore the nation and its people. 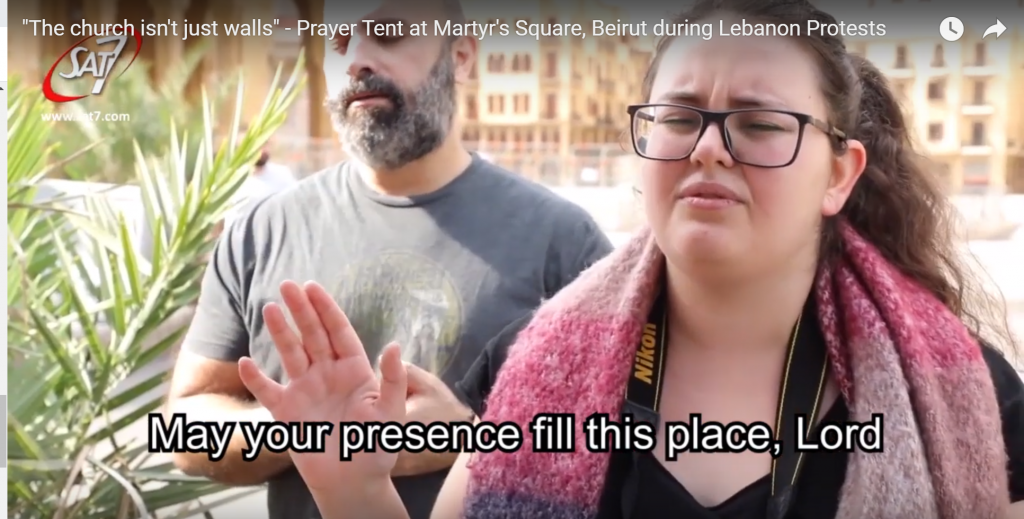 Read our previous coverage of events here. Also check our blog post by SAT-7’s HR Director Olga Messios, who shares what it was like to see the impact of the conflict in Lebanon first-hand.

SAT-7 Lebanon produces nonpartisan, non-political Arabic language Christian programming, which is broadcast across the Middle East and North Africa. The ministry’s vision is to see a growing Church in the Middle East and North Africa, confident in Christian faith and witness, serving the community and contributing to the good of society and culture.

A Facebook page under the name “Tent Of Praise Lebanon” is being managed online (not associated with SAT-7), sharing live videos of events happening at the tent, including times of worship being held.