Rustam endured a life of poverty, tragedy, and crime before a Damascus-style conversion brought him to Christ. Now a Pastor who has served in both Tajikistan and Afghanistan, he recently recorded SAT-7 PARS’ first discipleship series for Tajik viewers.

Growing up with ten siblings in one of the poorest countries of the former Soviet Union meant that life for Rustam was never easy. But when, at 14, his father was lethally poisoned, things took a dramatic turn for the worse.

The tragedy spurred Rustam’s decision to study medicine, but he was struggling financially. In desperation to fund his studies, he took to robbing people in the streets.

A turning point came when Rustam began attending classes run by a Korean Tae Kwando instructor who started each session with a Bible reading.

“One day,” Rustam says, “the instructor said, ‘Jesus wants to have a personal relationship with you’.”

That night, Rustam awoke to find his bedroom bathed in light. He turned and saw a person clothed in white, who told him, “I am Jesus Christ, the risen Lord”.

Rustam was suddenly gripped by Jesus’ holiness and his own sinfulness. Very afraid, he asked Jesus to forgive him. Jesus answered: “Do not be afraid. Serve me and spread my word in the whole world.” 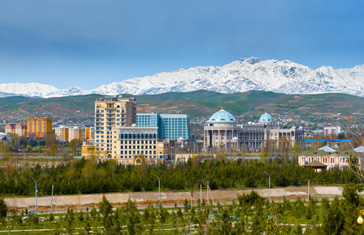 Soon after, Rustam went to train at a Moscow seminary. He then began nine years of Christian service in Afghanistan. It was in Afghanistan that Rustam first encountered the power of satellite television.

“I met many believers there who had come to Christ through watching satellite TV – mostly SAT-7 – and they were very strong in their faith,” Rustam explains.

After returning to Tajikistan in 2010, Rustam served first as an assistant pastor and then began the two congregations he pastors today. They are encouraged, Rustam says, “to be missionary churches, to spread the word and give it to the next person.”

In a country that has just 65 registered churches, they have a big mission field. Rustam’s series on SAT-7 PARS will strengthen and resource these churches.

For years, Rustam prayed for Christian media to develop in Tajikistan, but now says, “I see God had another way: to make programs through SAT-7”.

FROM PASTOR TO TV PRESENTER

When Rustam heard that a TV Producer was looking for Tajik Bible teachers for SAT-7 PARS, he didn’t hesitate: he had all the content for the new program Foundations of Christian Faith already prepared.

SAT-7 PARS is SAT-7’s Persian-speaking channel, with its main audience in Iran, Afghanistan, and Tajikistan. Most SAT-7 PARS programs are in Iranian Farsi (which Tajik’s can understand), but the channel wants to connect on a deeper level with viewers in Tajikistan by producing programs presented by Tajiks in their own dialect.

The 13-minute episodes will offer an easy-to-understand but extensive grounding in the Christian faith for Tajik believers. Over 20 episodes, the series will cover core teaching on the character of God, Bible doctrines and foundations of faith, and practical teaching on prayer, discipleship, and obedience.

“One of the problems the Tajik church has is that there is not enough teaching,” Rustam says. “My hope is that many Tajiks will watch and be fully established and strengthened in faith.”