“I want to feel safe out on the street” was the powerful cry from a young woman on You Enlighten Us. Presented by youth, for youth, SAT-7 ARABIC’s new talk show has been ground-breaking from its conception – but in challenging gender inequality in its first episodes, the program establishes itself as a true vehicle for positive change.

“I want to feel safe returning home at a late hour and not feel threatened by being robbed, harassed, or raped. I want to feel safe wearing what I like on the street, without having to be confined to a car,” continues Raghda, who appeared on the second episode of You Enlighten Us. Fellow guest Youstina adds, “I don’t want people to tell me that I can’t watch football, or that I belong in the kitchen.”

These strong female voices are part of a remarkably open, fruitful discussion on the new talk show, which aims to encourage positive values among viewers aged 18-25. The topics of gender roles and gender-based violence are unpacked by presenters Miranda Botros and Michael Victor, through interviews with guests and quotes from members of the public. The show also reports on initiatives that work to bridge the Middle East and North Africa’s gaping gender gap, which is the widest in the world.

“It was interesting that although young participants were convinced that men and women are equal, there was an understanding that this is not their daily reality,” says SAT-7 Developments Manager Nicoletta Michael. One young man argues that since women experience harassment, it is harmful for them to have complete freedom over how to dress. In response, counsellor Samah Ishak says, “If a woman freely makes a certain choice, while aware of the price and ready to pay it, then who is to stop her? When society,” she continues, “is full of women ready to stand for their rights, and men willing to support them, we will have change.” 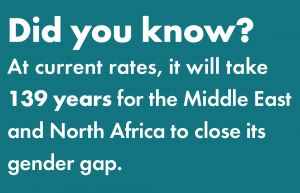 The egregious pressures on women in rural areas was discussed, as well as the negative impacts of patriarchal structures on men and boys. “Men are always stereotyped that they must be strong and not express their sadness or cry,” says young guest Bishoy. “I cannot chat openly because of this inherited culture.”

The program’s name, which is a play on a form of popular greeting, was chosen to emphasise how young people can positively impact each other. One of many warm viewer comments says, “You really enlightened us. This is what youth need. Young people need to discuss the positives and negatives of things and find solutions to problems.”

In its first episode, You Enlighten Us grabbed viewers’ attention by tackling a hot topic: social media and its pros and cons. The episode met with a strong response. “We received many requests from youth to participate in the program, many of them non-Christians,” says producer Rafik George. Future episodes will discuss topics including immigration, extremism, education, addiction, and conflict resolution.

The hour-long show is part of a wider SAT-7 ARABIC project to promote positive values in the region in order to improve human rights, especially freedom of religion and belief. The project, funded by the Norwegian Mission Society, also includes the new high-quality, thought-provoking comic-drama series The Wall and a series of creative “public service announcement” clips with simple, powerful messages.