It is with much excitement that the Christian TV network SAT-7 welcomes as the new Chairman of its International Council and Executive Board, His Eminence Archbishop Angaelos of the Coptic Orthodox Church of London.

His Eminence Archbishop Angaelos replaces Reverend Dr Habib Badr who stepped down from his role of SAT-7 International Council Chairman in April 2019. 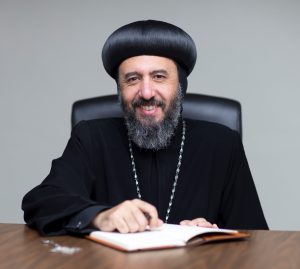 On 18 November 2017, His Eminence was enthroned as the first Coptic Orthodox Archbishop of London, having served as General Bishop of the Coptic Orthodox Church in the United Kingdom since 1999.

With a pastoral ministry spanning more than two decades, Archbishop Angaelos specialises in youth ministry and travels around the world to speak at youth conferences and conventions.

His Eminence is widely recognised for specialising in initiatives relating to advocacy, international religious freedom and development work. He is a member of, and chairs, numerous UK based and international bodies dealing with these matters.

Archbishop Angaelos was conferred the honour of Officer of the Most Excellent Order of the British Empire by her Majesty The Queen for ‘Services to International Religious Freedom’ and has also been conferred the Lambeth Cross for Ecumenism by the Archbishop of Canterbury and the Coventry Cross of Nails for Reconciliation.

“We are so happy to have Archbishop Angaelos as the new Chairman of our Council,” says SAT-7 CEO Rita El-Mounayer. “His experience, background and dedication to God’s purpose will bring so much to the leadership of SAT-7.”

“It is a privilege to be more centrally involved with this organisation,” shares Archbishop Angaelos. “This ministry has touched the lives of millions across the Middle East and North Africa by endeavouring to faithfully portray the image of our living and risen Lord at times of great challenge in our world. I pray SAT-7 continues to grow, and that I may, in some small way, be able to assist in its ongoing work and impact.”

24 YEARS OF SERVICE WITH SAT-7

Reverend Dr Habib Badr, Senior Pastor of the National Evangelical Church of Beirut, had joined SAT-7’s International Board in 1995 and served as Chairman of the SAT-7 Executive Board since 1997. As Chairman he was responsible for overseeing SAT-7’s activities since the ministry’s very beginning, when SAT-7 only consisted of one channel broadcasting in Arabic for two hours a week, until today where SAT-7 broadcasts on four channels 24/7.

“We are so grateful to Dr Habib for his dedication to SAT-7 all these years,” shares Rita El-Mounayer. “His wisdom and support have played a key role in the direction and growth of the ministry.”

Serving as Deputy Chairman to Archbishop Angaelos, is His Eminence Archbishop Paul Sayah of the Maronite Patriarchate in Lebanon.

“It is indeed exciting to have the support of four Archbishops on SAT-7’s International Council, as it is our ministry’s aim to support the various churches and denominations in the Middle East and North Africa,” adds Rita El-Mounayer.

In 2019 SAT-7 also said goodbye to Archdeacon Bill Schwartz, of the Anglican Diocese of Cyprus and the Gulf, who stepped down from the SAT-7 International Council. Dr Martin Accad of the Arab Baptist Theological Seminary in Beirut was welcomed as a new member.

“We ask for your prayers as SAT-7 moves into this new era, that our ministry may continue to be led with godly wisdom and vision,” shares Rita El-Mounayer.