While Iraqi demonstrators have been calling out to be heard by their rulers in some of the largest protests since the fall of Saddam, SAT-7 viewers heard that churches in Iraq are crying out to God for their nation.

Pastor Francis said that churches are holding continuous prayer nights and told viewers, “The people are in a state of protest against corruption… seeking their rights, their freedoms, civil rights, and justice.

“We are close to the protesters and following the events closely,” he added. “We offer help, support, love and the message of Jesus Christ among the supporters and security forces.”

Mass anti-government protests erupted in October in Baghdad and other central and southern cities of Iraq, provoked by corruption, unemployment and poor public services. As the crisis continued and demonstrators were met with live rounds and tear gas, SAT-7’s Arabic channel was offering support to Iraqi viewers.

Viewers of Close Up, a special live discussion program, heard that some Christians had gone beyond giving demonstrators their moral support. Speaking from Iraq, Salwan, a TV director and writer, told how he had gone to the protests five or six times.

He said, “They are peaceful and positive, but the country is shooting people and using tear gas extensively. They are arresting activists and kidnapping them.”

Salwan paid tribute to the courage of demonstrators and tuk-tuk drivers who ferried injured people from the Baghdad protests. He was especially encouraged by their unity despite their different religious and political backgrounds.

“We want to live in peace and security,” he said. “I hope to see my country free of political and religious divisions.”

“Our role is to return to God”

Asked how Christians should respond to the crisis, he said, “The same words that God told Jonah of the people of Nineveh and their wickedness coming up before Him applies to us now. The role of Christians in Iraq is to repent and return to God. We are not many in numbers and don’t have the power to make a change, but we trust that our prayers will be answered just as Nehemiah prayed and his prayers were answered.” 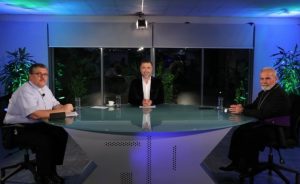 Revd Yousif Khalid Mikha, pastor of the Chaldean Church in Beirut, was one of the panellists on the program. Mikha echoed the call of protesters in appealing for an end to Iraq’s endemic corruption. He said, “Every employee must have integrity in their position regardless of their level in the workforce. The teachings of Jesus and Paul’s epistles are the basis for justice and integrity.”

Thinking of the over 300 people who have died in the protests, Mikha said, “The person who is hurting most because of all the events in Iraq is God Himself. He is the father of all those people with their different religions and denominations. He sees and is pained by how a father and a son are killing one another.”

The show’s other panellist was Bishop Yatron Koliana of the Assyrian Church of the East. He warned against the Church as an institution becoming involved in politics but stressed that all of Iraq’s people, “Assyrians, Chaldeans, Kurds, Sunnis and Shiites, must stick together and demand each other’s rights to live peacefully in one country as one people.”

The bishop highlighted the vulnerability of Iraq’s Christian community, which has seen its numbers fall from an estimated 1.5 million to 250,000 since 2003. Despite the efforts of those who “want to clear the Middle East of its Christians”, he said, “We trust that Jesus promised that He would never abandon us. He overcame the world and that’s our hope.”

Even SAT-7’s popular children’s programme, Family of Jesus, heard from Iraqi viewers. One of them, 14-year-old Rola, led viewers in praying “for the liberation of Iraq, to return to what it was like before”. She asked God to “Come with your glory over all the martyrs, the injured, the oppressed. I have faith that you will shine with your light and glory over Iraq.”

“We encourage all believers to pray for us,” stated Revd Joseph Francis. The country of Iraq and Christians of the region are crying out for prayers. Join us in praying for Iraq, and for God to bring healing and peaceful solutions to the struggles of the nation.