HOPE IN LIFE FOR RURAL ALGERIAN WOMEN “BORN TO DIE”

In this moving blog for the International Day of Rural Women (15 Oct), SAT-7’s Algerian Producer Samia Kessai shares how the challenges of life in North African villages leave women saying, “We were born to die.” Through her programs, Kessai wants to show that God says these women deserve life – and life in abundance.

“I have seen nothing in my life. I first opened my eyes here, in my parents’ house, and 41 years later, I am still here.”

This is the story of a friend of mine. She lives in a village in Algeria, she is not married, and when I first met her, she had never, ever left her parents’ house. Why? She had no opportunity. She is illiterate. She cannot go out to study, to meet anyone, or even to go shopping. She is 41 years old. And because she is not married and cannot get a job elsewhere, society obliges her to stay at home.

This life of isolation, of pressure from family and society, is the situation of many, many women in small villages. Early marriage is often the result, with girls accepting the first offer of marriage the family receives, for fear of missing their only chance to leave the house where they were born. For some, there is the constant risk of violence from family.

In addition, most rural women live in poverty. They often cannot read or write, having never attended school and worked in the fields from a young age. Their families have been subsistence farmers for generations, scratching out a living while unable to grow enough fruit or vegetables to sell, partly because there is never enough water for the crop.

I cannot express how these women are suffering. They suffer on every level: from isolation, stigma from society, poverty, and often health challenges. These women are only surviving, not living. One told me, “We were born to die. Not to live. Not to live a good life.” When we were last in the area, we heard that a woman nearby had killed herself at age 38. The problem was the same – her family, her brothers, did not like her to leave the house.

As for my friend, I shared the Gospel with her four years ago, and praise God – she became a Christian. But even within her home, she faces restrictions. Her mother knows she is a believer, and she burned the Bible I gave my friend in front of her. Her mother later took away a second Bible, too. There is no church my friend can access, and she has no Internet; no-one with whom she can have fellowship. She has a lot of questions, but no answers.

FROM DEATH TO LIFE

My friend tells me that her only refuge is Christian television. This is true for many isolated women – and this is why I produce women’s programs for SAT-7 ARABIC. For years, women who have watched our Algerian-dialect testimony program Free Souls have told us they are especially moved by the testimonies of other women. Now, we are producing a new program called Despite All, which shares the stories of women believers from Algeria and Tunisia.

The subjects are determined by the stories we receive from local women – single motherhood; divorce; child marriage at age 14, 15, 16; breast cancer. In each episode, we share the story of a woman affected by the issue and dive deeper into the issue through discussion, giving the facts. Then, we offer encouragement by explaining what the Bible says about this subject. Finally – crucially – we share the testimony of a woman who struggled with the same problems and found hope in Christ.

So many of the women I speak to are suffering deeply. At least when they watch Despite All, they can have hope. Hope that will enable them to live. When a woman says, “I was born to die”; for that woman, there is no life. She is waiting for nothing; she is desperate. This program will encourage that woman, touch her heart, and lead her to find hope in Christ.

One viewer of our programs, who is blind, said to me, “I cannot see anything, but I can feel everything. I can imagine the woman sharing her testimony on the program and how God is moving in her life.” I cried when I heard her words.

We want to show how God can change these women’s lives “despite all”. My prayer is that God will reveal Himself to these women. That He will meet them amid their suffering and struggle, and turn the existence they are living – which is like a form of death – to life. 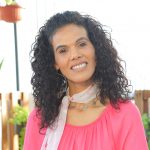 Samia Kessai was born in Tunisia. She has a master’s degree in Geography from the Tunisian Faculty of Human and Social Sciences. She studied Theology online from the University Aix-en-Provence. She has been working in Christian media since 2006. In 2012 she started working as a Producer and Presenter for SAT-7 ARABIC and is married to Algerian Salah Kessai, Producer of SAT-7 ARABIC’s Algerian programming.