Fresh thinking for the Arab world

A Way for Tomorrow is a new SAT-7 ARABIC show aimed firmly at the fifth[i] of the Arab world population who are aged 15-25. This almost 100 million people are the most highly educated age group in the region, the most questioning, and probably the most energetic! So it’s highly appropriate that this 26-part series gives them a voice and the invitation to do some fresh thinking on a spectrum of issues that matter to them and will shape the region in the future.

Arab young adults face multiple obstacles – from the highest level of unemployment of any age group, through the hopelessness and uncertainty offered by secular media, to the resistance to change of many political and religious leaders.

In contrast, producer Rafik George and director Lilian Rafaat say that this morning current affairs program is “filled with cheerful, positive energy and aims to present a positive outlook for viewers and help them find solutions for daily struggles”.

A key aim for the series is to promote dialogue, human rights and the acceptance of difference. Topics covered include freedom of religion or belief (FoRB), women’s rights and gender equality, peaceful conflict resolution, social change, minority rights, evaluating the media, and freedom of expression. Ultimately, it aims to stimulate public discourse on peaceful coexistence.

To bring this about, Rafik and Lilian drew together around 120 young participants from Egypt, Syria, Sudan, Lebanon, and Yemen, both Christian and Muslim. They invited experts as well as people with powerful personal experiences. One, in an episode on self-development, was Egyptian tennis champion Anmwar El-Kamouny, who battled bone marrow cancer to rebuild his career.

Each 60-minute episode has four segments that introduce the topic then explore it, with experts and two groups of young adults. First thoughts are presented by a presenter and four young people fire back their opinions. Then there’s 30 minutes for nine more young adults to share reactions to what they’ve heard with a second presenter. Next, in a “face-off” segment, everyone chooses either a blue or a yellow flag to show whether they are for or against the main argument, and give their reasons. Lastly, they have the opportunity to say whether or not listening to others has affected their views. 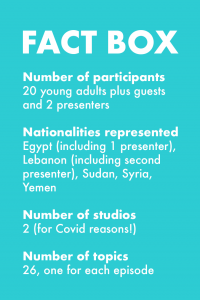 One topic in the series was atheism. Research, such as a 2018-19 Arab Barometer survey for BBC News Arabic[2], has highlighted a rapid drift away from faith in Arab countries, especially among the young. The percentage identifying as “non-religious” had risen from 8% to 13% since 2013, with 18% of under 30s falling into this group.

Co-host Bassem Maher introduced the topic by saying that the discussion is about the freedom to think – its advantages and disadvantages. In the first discussion, participants noted how questioning one’s faith in Arab societies is generally seen as dangerous.

But Christian lecturer Andrew Ashraf took a different slant. “Many are not used to discussing their faith,” he said, “so when faced with questioning, they feel threatened”. Despite that, he said, “Faith without mental conviction is blind faith. Without examining your faith, you can have a distorted vision of God.”

Barring honest questions is actually one way to cause atheism, he suggested. “One of the reasons for atheism is that many people feel oppressed and have unanswered questions and fear. Knowing that one can question without fear is in itself freeing.”

A video report from Syrian photographer Kamel Mashati added personal experience to the discussion. The country’s war had made him ask many questions, he said. It led him to do lots of searching and reading. “I didn’t reject God in my search, but I wanted to question what I was raised to believe. The war made me believe in God because I was too vulnerable to live without Him.”

When it came to the “for or against” segment, most of the 13 young people waved a yellow flag to show their agreement with the view that people should be free to think openly about faith in God. Steven was a dissident voice. “I travelled to Europe recently,” he explained. “I wouldn’t want us to become like Europe where churches are turning into bars and pubs.”

But Lina, holding a yellow flag, was more confident: “The person who is genuinely looking for God will find the answers and will be better able to influence others who need help in the same journey in their search for Him.”