FACING PHYSICAL DISABILITY IN EGYPT: ONE WOMAN’S JOURNEY TO A LAW DEGREE

Growing up with a disability in Egypt can present many Goliath-sized challenges to becoming the person God wants you to become. Hanaa is frank about the triumphs and defeats of her journey growing up with infant paralysis. She shares her story on an episode of the live SAT-7 program, Speak Up. 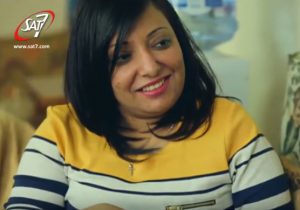 As a child, it was a struggle to sit alone and watch other kids run around the playground. She underwent many painful surgeries trying to treat the paralysis, and was house-bound for long periods of time during recoveries.

It was hard for Hanaa’s parents to watch her suffer. They had vastly different reactions to her paralysis, and they argued. Her father was afraid to send her to school. Her mother insisted she should finish school and be as independent as possible. In the end, Hanaa continued studying and finished high school.

Law school was her dream but it presented logistical challenges. How would she get up and down the stairs at the court house? Could she climb in and out of the bus on her commute? Hanaa says, “I’m afraid of being alone in the street, or of falling, or to be the object of people’s unkind glances.” In Egyptian society, many people look down on the disabled. They think people with disabilities are being punished by God for sins, or that they’re not capable of leading a normal life with a career.

Naturally, Hanaa had questions. She says, “I asked God, why did you let me go through this pain? He told me it was to glorify His name. I believe that people with pain can help others who are also in pain.” The very thing that has created obstacles for Hanaa has also opened doors for her to minister to others by fulfilling her dream. An opportunity opened up for Hanna to attend law school. Now, she is a licensed lawyer who provides hope.

Hanaa is a role model for others overcoming disabilities. Others are watching her testimony on SAT-7 and being reminded that no matter what Goliath-sized disabilities they face, the all-powerful God has a plan to use their gifts for His glory.

Next week, we will hear the testimony of an Iraqi mother who fled with her family to Lebanon when dangerous militants drove them out of their hometown.