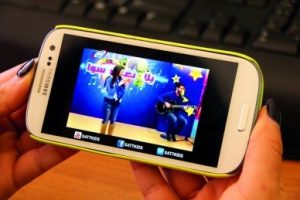 This is especially true for youth and young adults, who are the largest age group in the Middle East and North Africa. On-demand viewing lets them browse episodes based on their own schedule and interests.

As the leading Christian media broadcast network in the Middle East and North Africa, SAT-7 is responding to these changes in the way people consume information and entertainment. This means staying on the cutting edge of how content is delivered.

According to Juliana Sfeir, Special Project Manager and Executive Producer at SAT-7, web series are increasingly popular because “They are short, easily exchangeable between two parties, straight to the point and visually engaging. They are easily used in closed societies in and around the Middle East and North Africa where the web, the Internet and smartphone applications are their sole windows [to the outside world].”

In order to offer discipleship to a changing audience, we must make the message available where they are. This could mean a smartphone in the back of a cab, a laptop in an office, or a living room television. As part of what SAT-7 CEO and Founder Dr Terence Ascott has dubbed a ‘TV Everywhere Strategy’, SAT-7 programs are now available on YouTube, live web streaming, and smartphone apps, in addition to traditional televisions.

Your prayers and support mean the world to families in the Middle East. For just €10, you can support 10 viewers for 1 year! Click here to give now!