The bodies of 20 Coptic Orthodox Christians, martyred by the so-called Islamic State in Libya, have finally been received by Egypt. After three years of despair, their families were able to lay their sons to rest in their homeland.

On Tuesday 15 May 2018, the bodies of 20 of the martyred men were returned to Egypt, to the village Al-Aour in Minya. A formal reception of the martyred bodies was held at Cairo International Airport upon their arrival, where Egyptian government and church officials attended. They received the bodies with prayer and Coptic hymns of resurrection.

His Holiness, Coptic Orthodox Pope Tawadros II, received the bodies at the airport and spoke words of consolidation and encouragement to the Christian community of Egypt, “Their death can never shake our faith because the history of our Church proves that when a martyr falls, the faith grows stronger. Their lips were praising God…God’s name was the last word on their lips.” 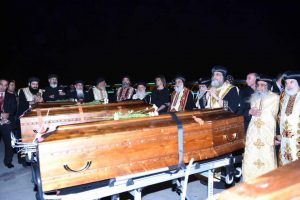 Funeral prayers were held at the new church built in their names: The Church of Martyrs of Faith and Homeland. A special shrine was built in which the remains have been laid, and SAT-7 broadcast the airport ceremony and funeral prayers live.

His Grace Bishop Rafel, Secretary of the Holy Synod of the Coptic Church in Egypt expressed, “We are joyful for their return and we humble ourselves in front of their unwavering faith that lasted until their last breath.” He described that the bodies had to go through analysis to match each head with the bodies.

THE EVENT THAT HORRIFIED THE WORLD

On February 15, 2015, Daesh militants released a horrifying video showing the beheading of 21 Egyptian Coptic Christian construction workers, which they kidnapped in the city of Sirte, Libya. The beheading took place on a beach along the southern Mediterranean coast.

Of the 21 martyrs one was Ghanaian. Matthew Ayairga was not originally Christian. Witnessing the faith of the others, when the killers asked him to renounce Jesus he reportedly said, “Their God is my God.”

The Libyan authorities discovered the bodies in a mass grave in south of Sirte in October 2017. A wide search for the bodies had been led by the Investigations Unit of the Anti-organised Crime Department in Misrata after receiving confessions from captured so-called Islamic State militants of the whereabouts of the crime scene.

His Grace Bishop Bevnotious of Samalut stated, “We did not have hope of the return of their bodies. We were shocked and saddened by what happened three years ago after we saw the video of the killing of our sons. The killers wanted to instill fear in the hearts of Christians, but our sons remained faithful, testifying their faith and dying for it.”

A POEM FOR THE MARTYRS

On the eve of the funeral, SAT-7 ARABIC also shared a poem about the martyrs. The poem had been written and recited by Dr Boshra Agban, and had been broadcast several weeks prior at an Easter concert event which SAT-7 recorded. The poem was inspired by the martyrs’ cries out to Jesus before their beheading. Watch poem recital here: (Insert subtitled poem link here)