Some 22 years ago, Egyptian–born consultant gynaecologist Onsy Morris, heard someone unveil “a genius, but too far–fetched” idea of a Christian TV channel for the Middle East. That “far–fetched idea” was SAT-7.

This summer, Onsy rejoined SAT‑7’s UK board of trustees because, he says, “a far-fetched dream became not just a little reality but a big, expanding, growing reality”.

Born in Egypt and raised in the Coptic Orthodox Church, Onsy has spent the last 40 years working and raising his own family in the UK. But he visits his mother and sisters in Upper Egypt once or twice a year and knows well the pressures Middle Eastern Christians face.

“Many congregations in Egypt live in fear,” Onsy says. He explains how there are not enough churches and Christians sometimes have to walk miles to attend one. Sometimes when believers gather in homes to pray, there are incidents because neighbours conclude this is a new church and a mob gathers to burn the house down. “With SAT‑7 you don’t have to go anywhere: the church is there for you: it’s fantastic!” he says. 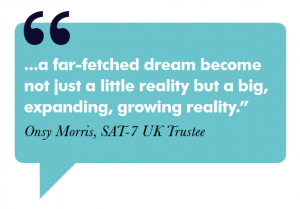 Onsy sees SAT‑7 as a “miraculous” provision for Middle Eastern Christians. Although he continues to worship in the Coptic Orthodox Church in the UK, he loves the fact that SAT‑7 is non-denominational and non-political: “It just shares the love of God with everybody”.

This is what is so lacking in the Middle East and North Africa, he believes. “The idea most people have is that God is so almighty, you cannot think of talking to Him freely or directly. You have to be scared and your hope of paradise is so small.” As a Christian, he says, “I want to say, ‘Look how much you love your kids: that’s how much God loves you. Look how you hug your kids when they are troubled; that’s what God does to us.”

“What I adore about SAT‑7,” Onsy concludes, “is that SAT‑7 makes God’s love the core issue. The only thing that will conquer violence is love.”

Hearing about SAT‑7 ACADEMY at the ministry’s NETWORK conference in March has got Onsy excited again! “This is another genius idea,” he says. “We are missing something if we concentrate on adults. If we can share Christian values with children, in one or two generations we could bring change to Middle Eastern societies.”