BEING A WOMAN IN THE ARAB WORLD

Imagine that your whole life is limited to what your family members choose. How would it feel to be denied education, a career, the choice of a partner, or even freedom of movement?

In some ways, the situation for women in the Middle East and North Africa (MENA) has improved in recent years. Girls’ access to education has increased, as has women’s political representation in select countries. But in many places, the situation remains dire. Women may face both gender-based violence and a lack of rights and freedoms. The conflicts that have engulfed parts of the region have only made these problems worse.

Many countries in the MENA do not have laws against domestic violence. Women who act against their family’s wishes may be attacked or even killed by male family members in “honour crimes”. And in some countries, sexual assault and harassment are rife.

DEPRIVED OF RIGHTS AND FREEDOMS

In many families in the MENA, depending on the country and community, women have very little control over their own lives. Many women are forced to marry against their will – some while they are still children. Approximately one in five girls in the region are married before the age of 18; in Yemen, it is almost one third. Family restrictions or responsibilities prevent women from seeking work. Even when they are free to seek a career, women may face discrimination in employment and within the workplace. In countries such as Iran, restrictions also limit the way in which women may dress and behave in public.

The violence that has engulfed Syria, Iraq, Libya, and Yemen has blighted the lives of women. In some cases, it has reversed years of progress towards greater equality. Women who have lost their husbands to violence often find themselves the sole parent and provider at a time of severe poverty. 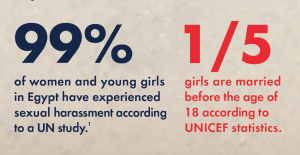 More than 70 percent of Syrian refugees are women or children. They are extremely vulnerable to violence, from both outside and inside their families. Displacement can cause domestic violence to escalate.

One survey of Palestinian refugees in Jordan reported that 44 percent of women had been beaten by their husbands. Many families in refugee camps are marrying off their daughters as children. They do this in the belief that it will protect them from the general threat of sexual violence.

HOW DOES SAT-7 HELP?

Satellite television is an extremely effective way of reaching women, especially those who are isolated and illiterate. When women rarely leave the house, they often spend a lot of time watching television. SAT-7’s programming brings the message of God’s love to suffering women who desperately need to hear about it. We have many programs especially for women that raise awareness of the issues that they face.

In Saudi Arabia, every woman must have a male guardian – usually their father or husband. Saudi women cannot travel or marry without permission from their guardian. They may also need permission before they can work or access healthcare. Without a male relative present, they may face great difficulty with banking or property transactions. Although there is no law against women driving, Saudi society is unaccepting of it.

In Sudan, and several other MENA countries, women face the devastating issue of female genital mutilation (FGM). 87 percent of women in Sudan between the ages of 15 and 49 have been subjected to FGM. FGM, usually carried out before the age of five, is a strong social norm often motivated by the belief that it ensures purity. FGM can cause severe immediate pain, long-term pain, psychological distress, and many medical complications.

In the summer of 2014, the so-called Islamic State (IS) seized swathes of territory in Iraq. It later established the headquarters of its “caliphate” in Raqqa, Syria. Some of the most heart-breaking stories that emerged were of the group’s brutal treatment of women and girls. Thousands of women and girls from the Yazidi minority were kidnapped, and many were held as sex slaves.