AN ENCOUNTER WITH JOY

As protests, uprisings and instability continue in Lebanon, it is encouraging to hear that Christians – and especially young people – are leaning on God for their security and joy. SAT-7’s Katerina Parpa spoke with the aptly-named Joy Basta, a 21-year-old presenter on SAT-7 KIDS, about his first-hand experience of the upheaval and the faith that carries him through.

“I want people to know that the Church here in Lebanon is full of joy because we know that we are not alone. God is with us, and He is our joy!”

Despite a challenging Skype connection – caused by the Internet in Lebanon crashing every few minutes – speaking with Joy Basta is a pleasure. As he shares how his early life experiences have equipped him to cope with today’s challenges, I feel pleasantly surprised by his hopeful, mature approach – and I wish that more adults could approach such situations with similar strength of faith.

“For the first few days, we were afraid,” Joy says. He describes the spread of the wildfires that consumed Lebanon’s forests, and the agony of waiting to hear that his family members had escaped. Then, he says, came the escalating protests and uprisings. In every major city, millions of people poured out into the streets.

“When it all started in October, I was in Egypt visiting family and churches. I was afraid I would not be able to fly back home,” Joy shares. Although born and raised in Lebanon, Joy cannot obtain citizenship since his father is not Lebanese. Joy knew that if war were to break out in the country, he would not be allowed to re-enter.

Thankfully, he was able to return to his family safely before the situation worsened. But back home, fellowship became very difficult. “As the violence escalated, it was unsafe for the youth of our church to have our weekly meetings, and on Sundays many people from our congregation could not attend church because the streets were blocked. We tried to find a way to take the church to them – to the nearby areas where they lived – but it was not possible,” he says.

Strong foundations from a turbulent childhood

Like most people in Lebanon, Joy is no stranger to political instability and war. Growing up, he also endured discrimination and rejection. As the son of a foreign pastor, he felt ostracised and despised for being different. “I had zero friends in my neighbourhood,” Joy shares. “Everyone around us hated us.”

Joy’s saving grace, he says, was his church community. “We didn’t live in a very friendly place, but the people in our church were like family. I was surrounded by people who loved me. I felt more connected to people from my church than to kids from school. This kept me from getting involved in harmful things that my peers at school were doing.”

It is clear that rather than supressing his spirit, these challenges laid the foundation for the young presenter to build his faith and trust on Jesus. As co-host of the popular children’s program A Riddle and a Story, which began in 2018, he has since become an instrument of hope and encouragement for young people across the region.

A wide-spread impact through SAT-7 KIDS

Joy has been with SAT-7 KIDS since the channel launched in 2007 and began appearing on the news program As-Sanabel and the worship show Let’s Sing Together at just nine years old. But, he tells me, he never fully appreciated the channel’s impact until he visited viewers on the ground.

Joy recalls a trip his family made to Jaramana, near the Syrian city of Damascus, in September 2019. Jaramana hosts approximately two million displaced Syrians who fled violence elsewhere.

“When we visited the church, so many children and youth were running up to me, saying, ‘Oh! You’re Joy from SAT-7 KIDS! We love your show; we watch you all the time!’ They told me how much they love the channel, the various programs, and presenters. I was surprised they even had access to SAT-7 KIDS.”

Then, on a later visit to churches in Egypt, Joy heard from parents who expressed how much they love spending family time watching SAT-7 KIDS. One mother thanked Joy because her little boy looks up to him and likes learning to play the drums – just like Joy.

“I never expected that anyone would really look up to us, or me, on the show,” he says. “When we are filming in the studios, we receive many messages from our young viewers telling us how much our programs have helped them. But going outside the studios helped me see the channel’s impact across the region, and to realise my responsibility to be a good role model.”

Joy lives up to his name

Just when I thought I had heard all that I could hear from this wise-beyond-his-years young man, he humbly asks, “Can I please share one more thing?”

He unfolds a Bible verse that has helped him during the difficult times in Lebanon. “They have bowed down and fallen, but we have risen and stood upright!” (Psalm 20:8)

“It helps me to have faith that if the situation in Lebanon hinders SAT-7’s work – if we seem like we have bowed down, or the economy is falling – God will help us rise and stand upright again,” he says. Then, he speaks the words that have stayed with me ever since.

“It’s true that we [Lebanese] passed through difficult times, and we continue to. But we are the most joyful people you will ever meet. Despite the wars, and now with all this instability and uncertainty, we are full of joy. I want people to know that the Church here in Lebanon is full of joy because we know that we are not alone. God is with us, and He is our joy!”

I left the conversation feeling hopeful about the work young Middle Eastern Christians are doing to support each other and their region in prayer and in practice. After speaking with Joy, it has become even more apparent to me that the seeds SAT-7 is planting in the hearts of our young viewers are taking root. “Bit by bit,” as SAT-7’s CEO, Rita El-Mounayer, always says, “we will see a change in the future of the region.” 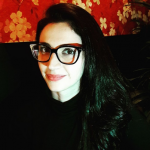 SAT-7 Communications Officer | Katerina Parpa is based in Nicosia, Cyprus. She was born in Cyprus and grew up in the US. Her previous work ranges from secular media to retail management and marketing. Her passions are books, health, art and culture, and supporting the local community through volunteer work.