A VOICE OF REASON IN A WORLD OF CONFLICT

SAT-7 ARABIC’s current affairs program Bridges stands in welcome contrast to the conflicting stories and aggressive talk-show hosts that often dominate the news in the Arab region. With its credible sources and trusted guests, the show guides viewers on a path towards acceptance, empathy, and greater awareness. 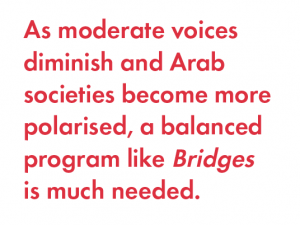 Bridges offers its viewers reliable news and unbiased analysis. The weekly program aims to discuss all subjects openly, from important world events such as the wars in Syria and Iraq, to sensitive, taboo topics such as female genital mutilation.

The program is broadcast live and encourages audience participation through phone calls. Many viewers and experts call in and contribute to the live discussions.

A program for all viewers

Bridges never restricts its content to a Christian viewpoint or viewership. The program invites expertsand guests from all backgrounds without discrimination,aiming to build bridges of understanding between allfactions of society. Bridges’ guests include researchers,journalists, members of parliament, and activists fromall religions and denominations. Minority and civil rights are high priority topics for the program. In 2016, Bridges dedicated a series of episodes to minority rights in the Middle East. Magda Haroun, a representative of the tiny populationof Jews remaining in Egypt, was one of the guests.

Attacks on Christians in the region are also discussed. In May 2016, Bridges reported on an attack on a Christian community where fanatics had stripped and beaten an elderly woman over a false rumour. Bridges also sheds light on the suffering caused by war, with team members travelling to Iraq and recordingwith church, community, and government leaders. 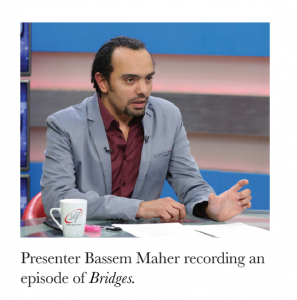 When 27 people were killed, and at least 40 wounded,in a suicide bombing at a Coptic Orthodox Church inCairo, Egypt, Bridges was quick to respond. On thesame day in December 2016, the program went live with a special episode to cover the incident andinvited guests from different religions to give commentary.

In another episode, Bridges made a live phone interview with Abdullah Kurdi. He is the father of Aylan Kurdi, the Syrian toddler who became an icon for the plight of refugees crossing the Mediterranean when his body waswashed-up on the shores of Turkey in September 2015.

As moderate voices diminish and Arab societies become more polarised, a balanced program like Bridges is much needed.