A PLATFORM FOR WOMEN’S VOICES

“Every woman has her struggles. Needle and New Thread is like a room with glass walls. When we are transparent, women join in, speak freely, and listen to one another.”

Riham Jarjour, who spoke these words, is the latest presenter to join the women’s talk show Needle and New Thread. The live program, airing weekly on SAT-7 ARABIC, enables women to express themselves openly without fear of judgment or prejudice.

Why do women need a platform?

In a culture where the issues that affect them have been sidelined for decades, women are thirsty for recognition. They need a safe space where they can discuss their problems, a community in which they do not feel ignored or abandoned.

Needle and New Thread is presented by women, for women. The team discuss culturally sensitive topics such as sexual abuse, attitudes towards mental health issues, and dating in a conservative culture.

That these topics resonate with the women watching is evident from the increasing number of messages and calls received from viewers during live broadcasts. Some women are bravely sharing their experiences of sexual abuse. Others have asked for parenting advice on how to help children who abuse technology, or are viewing pornography.

Maggie Morgan, the show’s Producer and Director, explains that some issues have been swept under the carpet even by women themselves. Some women are fearful of regular medical check-ups and screenings, such as mammograms. Instead of sharing their fears, they downplay the importance of these appointments.

Another such issue is physical abuse, which is widely accepted in Middle Eastern societies without laws that criminalise domestic violence. The program continually receives shocking stories and testimonies around this topic. “In one interview with a young boy, he expressed that it was fine for a man to beat his wife if she made him a bad meal,” Morgan says.

Riham Jarjour, herself a young mother of two, engages openly with the audience about life’s daily issues. During one episode, she spoke about her relationship with her grandmother and how mother figures in a family can leave long-lasting legacies.

“I respect callers who make an effort to call in live and share their problems,” says Riham. “It takes a lot of courage to open up publicly on air. I pray before each episode that I will handle every call well, because if a caller’s feelings are hurt, you lose your credibility. Every single reaction is seen by the audience, so we must be very careful with our facial expressions during a call,” she continues. 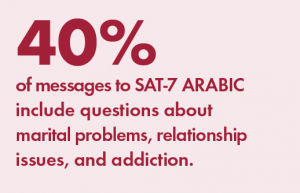 Riham herself goes to great lengths because she believes in women and their equal right to a wholesome life. She lives in Alexandria, Egypt, and travels to Cairo to present the live broadcast of Needle and New Thread. On broadcast days, Riham wakes up at 5:00 in the morning to get her children ready for school. Then, she catches the early morning train to Cairo, later spending the night in the city and returning home early the next morning.

Riham is from Syria but has lived in Egypt for 10 years. Her knowledge of Arab culture in several countries has prepared her for her unique contribution to the show, viewed by so many women across the Middle East. She sees a great opportunity in the program to empower and support women.