FROM THE STUDIO TO THE STREETS OF BEIRUT

Among the rubble and dust, SAT-7 Lebanon staff provide food and refreshments for the people in the areas affected by the Beirut Port explosion. Juliana Sfeir shares her eye-witness account of relief efforts in the explosion’s aftermath. 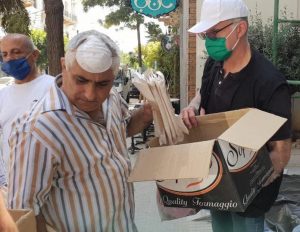 On the morning of 8 August, a group of staff from the SAT-7 Lebanon office head to the area of Beirut most devastated by the blast. With boxes of the traditional thyme pizza breakfast “manakish”, cases of mineral water, and cartons filled with chocolate bars, we arrive at a scene of buildings reduced to rubble. Our intention is to offer a free breakfast, and some encouragement.

The scene that greets us has people of all ages mixing – handing out and sharing food and provisions; it could be a scene from a community gathering. Only the rubble and dust reveal the story of the destruction and devastation. The buildings that are still standing, mourn the Port – a martyr laying by the sea with smoke and gas still oozing from the debris and wreckage.

As for the streets of Gemmayzeh and Mar Michael – what used to be the thriving and buzzing tourist area of Beirut – a different kind of music rises from the corners and pavements. Construction workers fix the fallen walls inside shops, restaurants and buildings, others hide in the shade, resting and welcoming the breakfast sandwich and chocolate we offer, some gratefully grabbing bottles of water from the cases we are carrying. Elderly people share encouraging words with the youth who are energetically cleaning the streets; a parade of young people with their colorful brooms volunteer their services to whoever may need it. Helpers come from every walk of life and every possible background, foreigners, United Nations, Kuwaitis, Muslim schools, Churches, law firms, NGOs etcetera.

The Lebanon News takes a liking to our group activity and interviews two of our ladies. We soon learn that we are going live on national and regional satellite television.

With all our boxes now empty, we return carrying with us the memory of an unforgettable mark of resilience felt amidst the Lebanese people who, once again, are determined to rise from the ashes, answering the historical call of the legendary Phoenix. 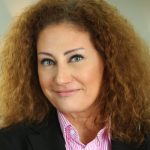 Juliana Sfeir is an award-winning television producer and has been SAT-7 ACADEMY’s Brand Manager since 2017, based in Beirut Lebanon. Prior to this role, Juliana produced the groundbreaking initiative TEACH (Theological Education for Arab Christians at Home), and in 2013 she received a Human Rights Award for Journalism for two SAT-7 television campaigns tackling discrimination against women and attitudes towards disability.